Hand paintings of antique pictures of originals with a historic value 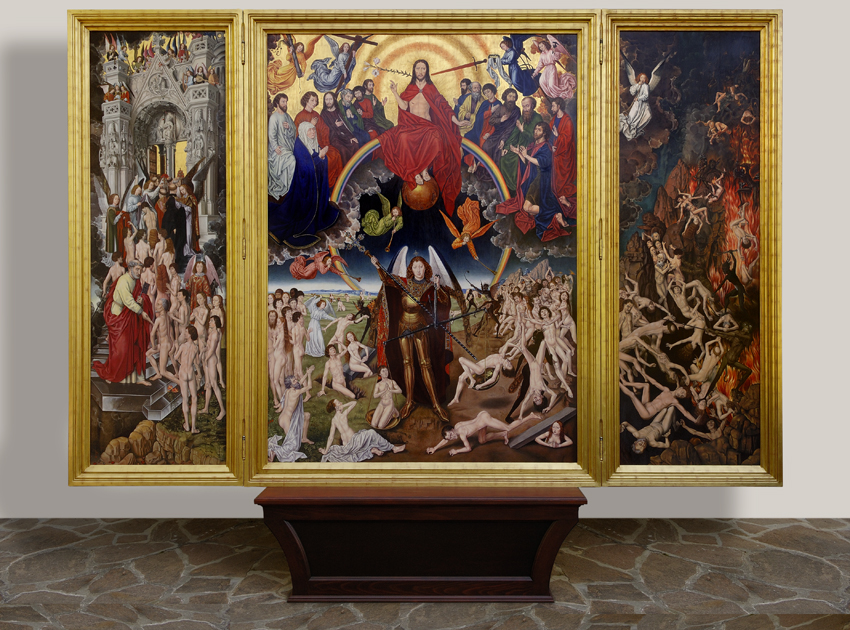 ‘The last Judgement’ by Memling
Copy, cm 370 x 290, created with the intention to study the history, the painting techniques and the brightness of the Flemish painters of the '400 with a special manner, partly empirical from the practical experience and intuition.

Scene with the Christ and four angels with the symbols of the passion, the 12 apostles with Maria and Saint John the Baptist and at the bottom the Archangel Michael 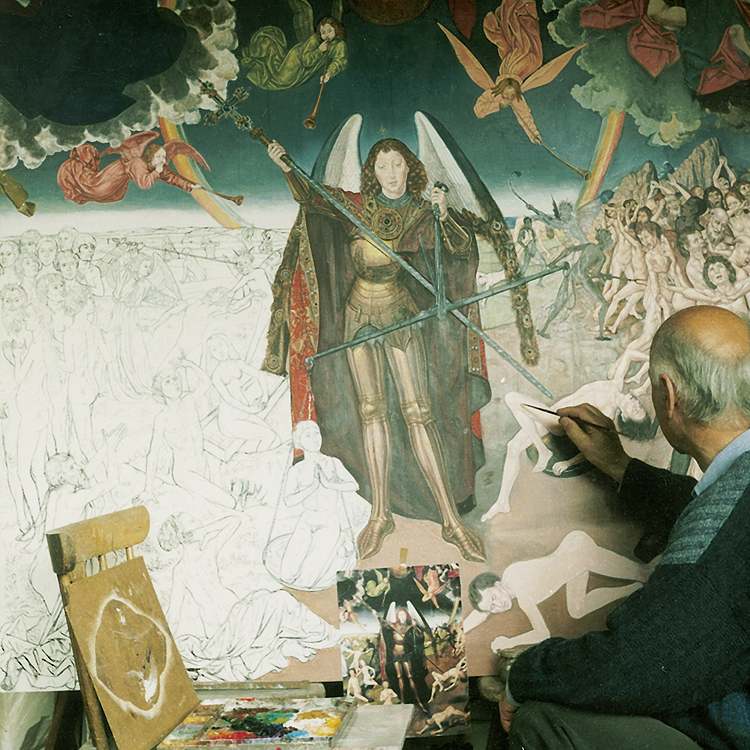 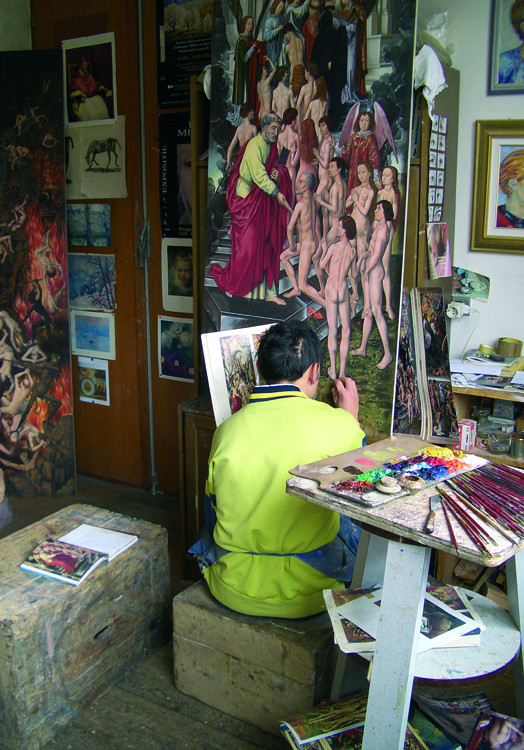 Bruno and Igor while creating this important copy 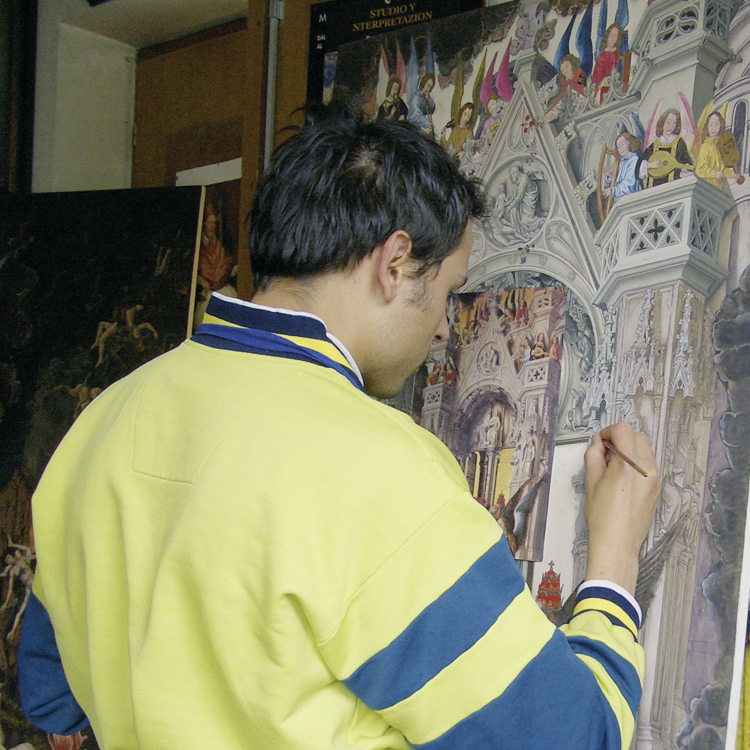 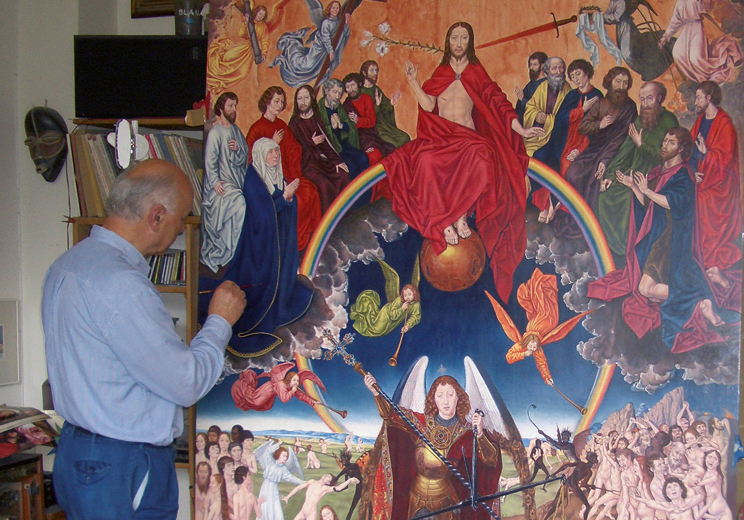 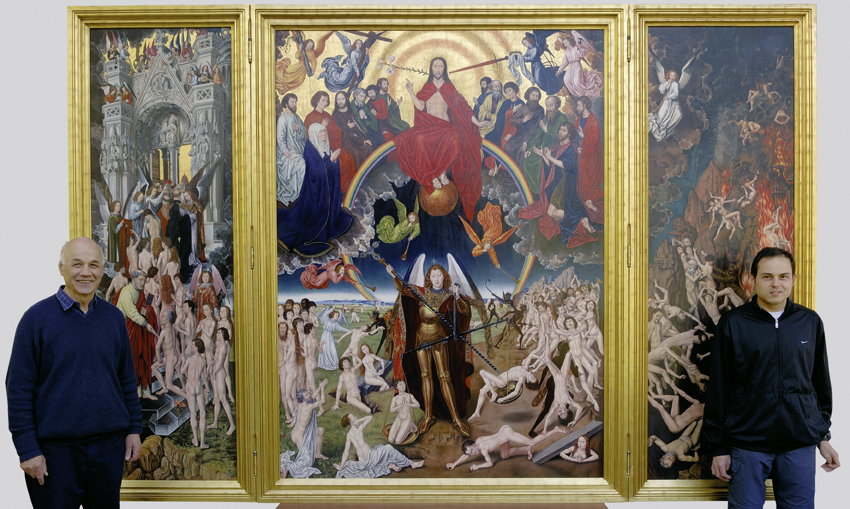 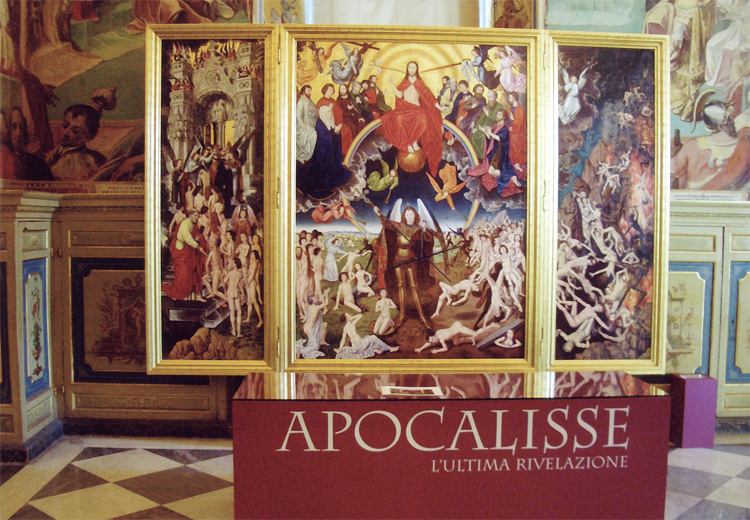 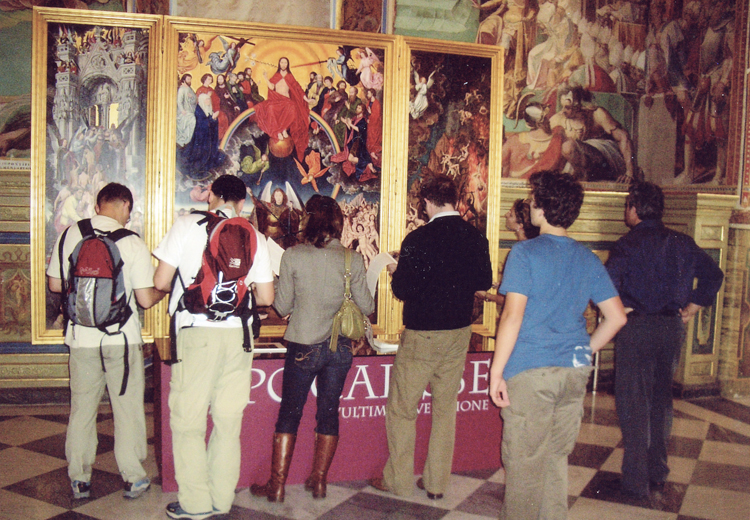 Presentation of the original copy painted by Perathoner Bruno and Perathoner Igor.

The original work by Hans Memling, which is to be found in the museum of Gdańsk (Poland), has never been exhibited in Italy. We are glad to present a copy which corrisponds to the original size of the painting by Memling, after having exposed it for 3 months in the ‘Badia Fiesolana’ in Florence in Autumn 2006, exactly in the same church where the triptych should have been placed in 1471. Furthermore we are glad to show our copy also in the Vatican Museums during the art exhibition ‘Apocalypse. The last revelation of St. John’ in Autumn 2007.

The ‘Last Judgement’ is one of the most skilful works of Hans Memling. Its particular cosmical breath is already the proof of the master's space-conception and, at the same time, it creates a holy world which shows a physical dimension, more than a hieratic (solemn) one. The painting has the force of a tornado and the glitter of a night explosion. With his ‘Last Judgement’ Memling has created a majestic work, which is all in one with its lateral panels (predellas). It also paraphrases partly some subjects of former artists' works. Everything turns around like a spiral, which finally ends in a labyrinth. An interesting detail: The Archangel St. Michael wears a Lombardian armour of the past. ‘The Last Judgement’ was commissioned to Memling in 1467 by the director of the Medicean Bank of Bruges (Belgium) Angelo Tani for the chapel Saint Michael of the Badia Fiesolana. This church was started to be built on charge of Cosimo de Medici and finished by Piero de Medici in 1466. Tommaso Portinari, successor of Tani in Bruges, organised the transfer of the triptych to Italy by ship in 1471, but indeed it never arrived. The ship was attacked by a privateer of the Hanseatic League, which fought against England in the North Sea. Memling's masterwork never reached Italy.

The very precious work commissioned and already paid by Tani didn't arrive to Fiesole, but was placed in the cathedral of Gdańsk in Poland. May be in order to replace this work, Tommaso Portinari commissioned another Flemish artist, Hugo van der Goes, to paint the famous ‘Triptych of Nativity’, which arrived to Florence triumphally in 1483 (nowadays it is placed in the ‘Uffizi’ in Florence). Ghirlandaio and Filippino Lippi had surely seen this work, but also before, other Italian painters, like Filippo Lippi, Andrea Mantegna, Antonello da Messina and Giovanni Bellini knew the works of Flemish painters. They mostly admired those works for the brightness of the brilliant colours, which was the result of the use of more oil and coating and through different phases of systematic and complex painting, inheritated by the School of Van Eyck and Robert Campin. A kind of art which can be called Ars Nova, with a poetical realism worked out in the finest details. Consequently we can affirm that Antonello da Messina is the Italian painter who most compare with the Flemish School. On the other hand Hans Memling and Hugo Van der Goes are the Flemish artists who mostly compare with the Italian Renaissance. The influence was reciprocal. The Flemish painters learned by the Italian artists the thought of perspective and the architectonic power of their style.

The adventurous story of Memling's triptych is also a good example of the good, both economical and artistic relationship between different countries all over Europe in the Medieval Time. At the time of the Napoleonic Wars in 1807 and during World War II the triptych was again subject of adventurous and dangerous transfers.

The ‘Last Judgement’ by Memling met in its history different phases of sometimes positive and sometimes negative critics, but we have to keep in mind that the painting went out of Poland only a few times in more than 500 years.

It is commonly known that Paul Gauguin was a great supporter of Memling. Between his first and his second voyage to Tahiti, in 1894, he went to Bruges to admire Memling's works. He was especially attracted by the colours used by the great Flemish painter. On February 12th 1894 Gauguin took a visit to Saint Jean's Hospital, where many of Memling's works were exhibited. He also signed the visitors' register and noted his home adress: Tahiti. Only a few days later even Henri de Toulouse-Lautrec and Felix Vallotton paid a visit to the same place. After his return to Paris Gauguin wrote to his friend Daniel de Monfreid: ‘ In Bruges I saw Memling's marvellous works’. Gauguin's journey fellow Julien Leclerc wrote the following commentary soon later: ‘During our recent trip to Belgium, Paul Gauguin and me knelt down like two pilgrims in front of Memling's masterpieces in Bruges’.

‘The Last Judgement’ was a very common theme in the medieval time and also during the Renaissance. Nowadays we could try a paraphrase by saying: Justice keeps not to this world, but hope comes by love of God's son and because the only material world is visible, we keep in our mind the philosophical truth ‘there is no shape without it's creator’ (Keine Gestalt ohne Gestalter - W.Stern).

After the exhibition of our copy of Memling's triptych in Illeggio nel Friuli in August-September 2007, we'd like to thank Don Alessio Geretti, Don Angelo Zanello of Tolmezzo and the management of the Vatican Museums for giving us the chance to expose our painting close to great original works of the history of art. The Triptych has been exhibited in the Vatican Museums from 18 october to 8 of december 2007 and in Vicenza 2014.

Painting of depictions on canvas and wood 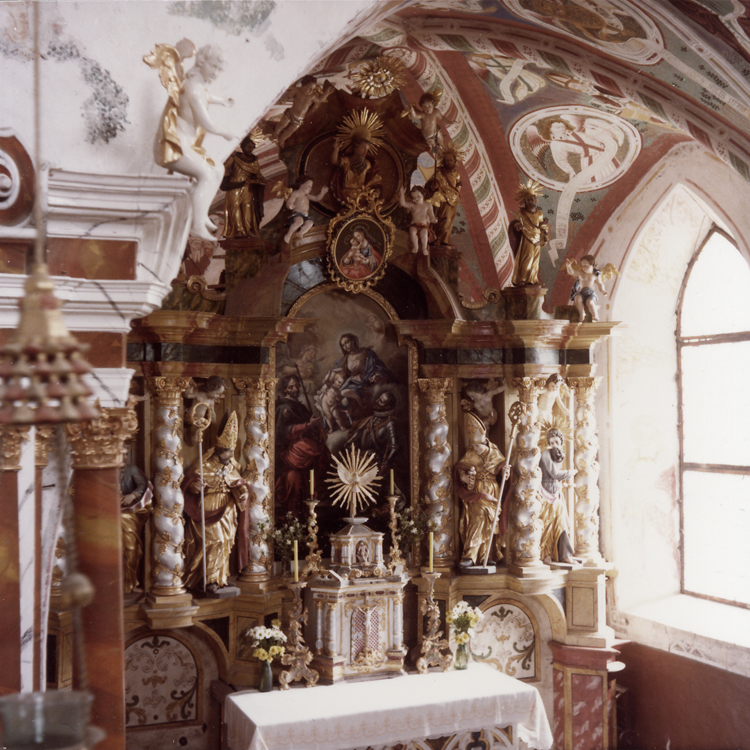 The altarpiece in the Saint Jacob's Church (a copy) 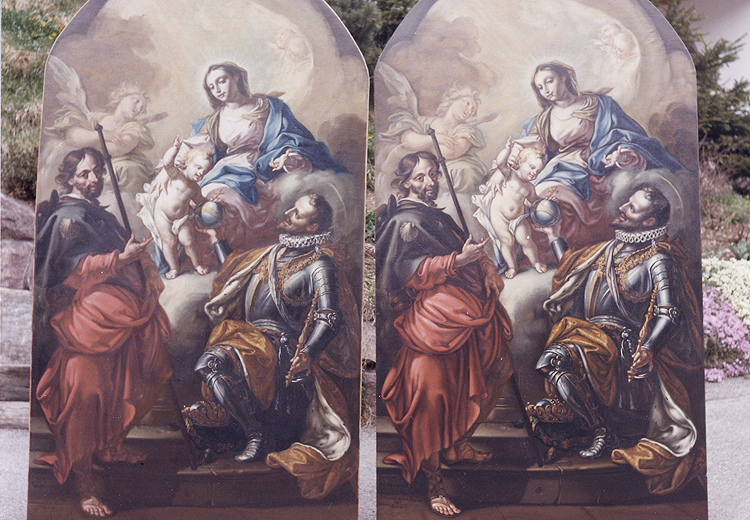 Bruno Perathoner has made the copy by hand life-size on a canvas using oil colours. The altarpiece in the Saint Jacob's Church near Ortisei has been painted by F. S. Unterberger in 1751. For reasons of safety the original is now kept in the Museum of Ortisei whereas the one you can see in the church is the copy made by Bruno Perathoner. 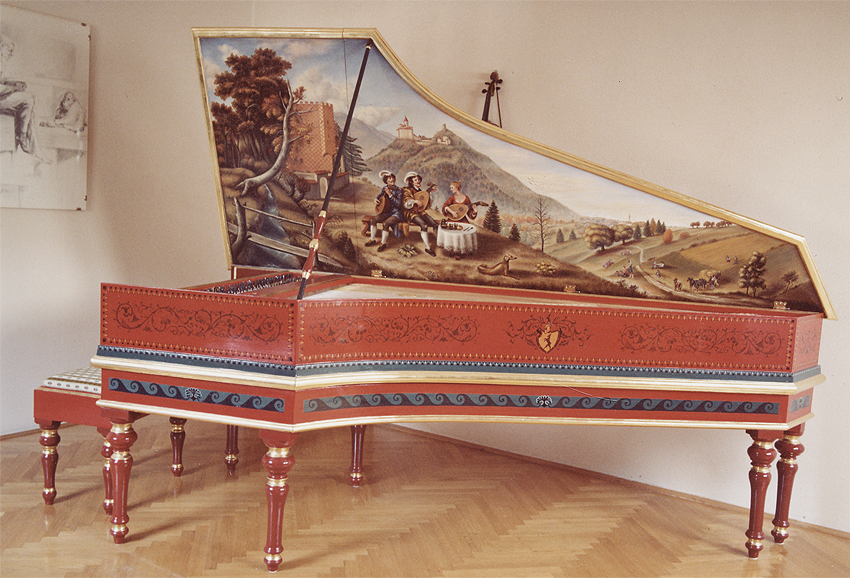 The painted cembalo
The new cembalo has been painted, gilded and decorated in romantic-neo-classical style on behalf of a cembalist. The work has been realized by Bruno Perathoner and his staff.